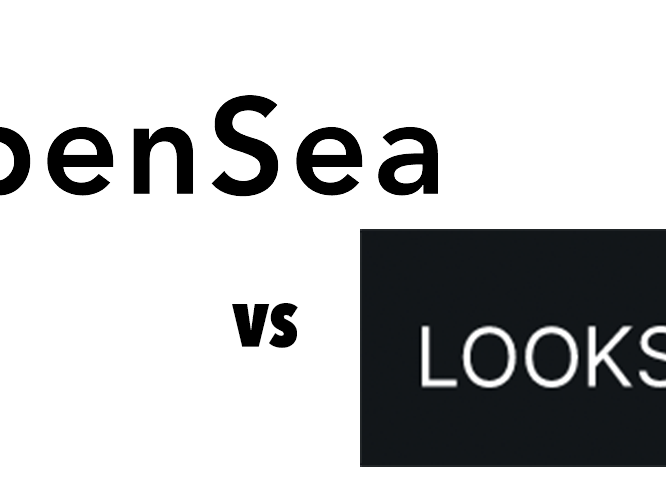 Opensea vs LooksRare is the latest buzz in the NFT Comminuty. The day is January 10, 2022, and the NFT Marketplace Looks Rare just launched. The NFT Community is in its usual frenzy when someone new happens. There is a $LOOKS Token attached, so like many of us who like freebies, people are scrambling to find out how they can claim $LOOKS. Before we get into the gritty details and the who, what, when, and what-ifs, let me, first of all, explain why LooksRare may be successful, or not.

OpenSea NFT Marketplace and its problems

Opensea is currently the most popular NFT marketplace. It has seen a good share of users, made a lot of money, and had its fair share of issues. One of the issues with Opensea I often see people complain about is the site being down. Another problem I often see is security and fraudulent NFT listings. Also, Opensea, although it has opened doors for many artists, via their lazy minting, some worry about its stability. For those deeply rooted in crypto, their problem is that Opensea doesn’t have its own token.

Speaking of tokens, recently, another group created and launched the SOS Token, where they rewarded Opensea collectors. Many felt like this should have been the responsibility of Opensea. Others whispered that Opensea does not care about their users and only care about their IPO. Whatever complaints people have about Opensea, one cannot deny that they are still, the biggest NFT marketplace right now. One also cannot deny that maybe they did not see the success that has been seen in NFTs in the past few months, coming. Those who argue in favor of Opensea say it is very difficult to run a marketplace with the volume that Opensea sees daily. In other words, they are doing their best. But, is their best good enough to sustain them as the number 1 NFT marketplace?

Coinbase NFTs vs Opensea vs LooksRare?

If you take a sneak listen into the NFT community and you will learn that many have been waiting for a viable Opensea alternative. I wrote extensively about current marketplaces in my What are NFTs article. Now we have Opensea vs Looksrare vs Coinbase NFTs. When Coinbase announced its NFT Marketplace, many were excited. Many, also hurried to sign up, because they felt this was the alternative they had been waiting for. Others wanted something new away from the norm. This excitement eventually dwindled when many found out that Coinbase NFTs were going to be curated. This meant that getting to sell on their platform wasn’t going to be for everyone. In the spirit of web3 and the metaverse, I could hear the imaginary boos from the crowd, upon hearing this news.

So in this new year, 2022 a marketplace like LooksRare coming out of nowhere will surely get attention. It gives the NFT Community hope that they may have found an alternative to Opensea that isn’t highly curated. I mean, who has time to be filling “pick me” forms right? For those who make great art and are not “well connected,” this also gives them more options. Also, those who do not enjoy curated sites argue that art is meant to be enjoyed and not limited. They say, let the people decide what is good or bad. With that said, let’s take a deeper dive into LooksRare and the LooksRare token.

According to their website, Looksrare is an NFT Marketplace By NFT people, for NFT people. When you think about this slogan in retrospect, what does it mean? To me, this states that we the people using NFTs have created this platform for others in our community. It also tells me that, we created this platform to fix the many nuances of other platforms. Meaning, we know the problems and we are here to fix them. Some are even already so bullish on LooksRare that one NFT user sold his Punk to buy 55ETH worth of $LOOKS token.

Will this be the case? Well, only time will tell. Another thing that I noted is that LooksRare lists NFTs in WETH, which is wrapped ETH. Wrapping ETH does not affect its value so 1WETH is still 1ETH. It just functions a bit differently from Etheruem. As the months’ progress, I will be bringing you updates on how LooksRare is doing as a marketplace. In the meantime, many have connected their wallets in an attempt to claim the LOOKS token but many have also found that there is a catch.

How to Claim LOOKS Token

To claim the LOOKS token, you must first of all have traded at least 3 ETH on Opensea. The vast majority of the community does not fall into the category. When the site first launched, there was a header at the top that made it easy to check if you could claim tokens and how much. If you do qualify, you would then need to list an NFT in their marketplace, to claim a token.

If you are eligible, you have 10 days to claim your tokens. So, by January 20, 2022, you will no longer be able to claim the $LOOK token. If you do not care about tokens and yadi yada and only wish to use the marketplace, this does not apply to you.

Once you have determined that you are eligible for a LOOKS token, you can then list your NFT for sale. You can list any NFT that you own, be it bought or created by you. As a test runs for this article, I listed my Squishy Ape NFT. Remember to check if you are eligible first before listing because many listed an NFT, only to find out that there were not eligible. This of course cost them ETH gas fees. I had to pay gas fees to list. Save yourself this headache by checking first. If you plan to list regardless of tokens, or if you wish to see how the site functions, this again doesn’t apply to you.

Should I sell or buy my NFT Art on LooksRare?

If you are wondering about Opensea vs LooksRare, the most important this you can do before deciding where to sell or buy NFTs is to research the marketplace. Like I said, as the days and months progress, I will bring you a more in-depth look at Looksrare. There are many other marketplaces where you can still list or buy NFTs. Rarible is a popular marketplace that also features lazy minting. A popular but more expensive one to transact on, is Foundation.

If you are looking for a marketplace that offers great user support, a lot of them fall short. Rarible and Opensea are better than Foundation when it comes to supporting artists. I believe a lot will port to LooksRare if they are whom they claim to be. I already prefer their interface. It is much nicer looking than Opensea.

As for me, will I be listing my NFT art on LooksRare? Time will tell, because I plan to continue doing my research before I leap. If you enjoyed this article or have any questions, you can find me on Twitter @tonipayne